Proudly Serving Worcester for over 150 Years 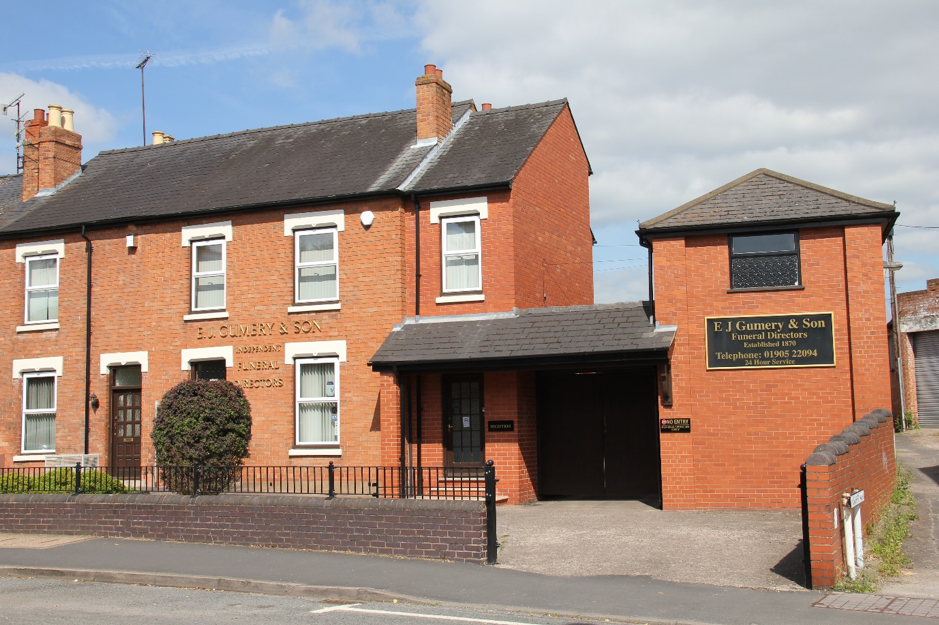 Worcester’s oldest established family firm of Funeral Directors is 150 years old this year.  William Gumery, a local carpenter, cabinet maker, coffin maker and undertaker founded the business in 1870.  He operated from premises near the Old Water Tower in Tower Road, Barbourne, before moving a few years later to the house and workshop in Ombersley Road, the site of which is still used by the firm today.

The present title of the firm comes from Ernest John Gumery who took over from his father William in 1907.  Changes took place in the next two decades with horse-drawn hearses and carriages being slowly replaced by motor vehicles.  Also the first telephone was installed, the number being Worcester 94, followed by 2094, and finally to the present day number of 22094.

Following the death of Ernest in 1948 his son Reginald Gumery continued the business.  A burial was very much the norm for the time but if you were to require a cremation it would involve the cortege travelling to either Lodge Hill, Selly Oak or Cheltenham crematorium which would entail additional time and costs.

Ken Gumery joined his father in the spring of 1960, the same time as Worcester Crematorium opened.  In those days coffins were still made of solid English elm or oak in the workshops on site.  By 1970, 65% of funerals were cremation so it was decided to bring in manufactured coffins of natural wood veneer to be fitted and lined on the premises.

On the death of his father in 1975, Ken took over the full running of the business with the invaluable assistance of his loyal wife Patricia, who later became a partner in the firm.

The 1980s saw extensive building carried out to the property.  The house (no. 70) was completely renovated and modernised and a two-storey extension was added to accommodate a new office, reception and arrangement offices.  Shortly afterwards workshop and rest rooms (no. 68) were entirely demolished to make way for a new building containing chapels of rest, preparation area and mortuary, all fully air-conditioned.  Finally to the rear of the property a block of garages were built to house the funeral vehicles.

In the autumn of 1997 no.72 Ombersley Road came on the property market.  The business purchased the house with a view to future expansion.

Sadly in 2002 due to health and other issues Ken took the difficult decision to stand down from the business.

The business was acquired in April 2002 by a local independent family-owned and run business established in 1843.  It was important to Ken that the new owners should represent the same independent family values and personal service that he felt his family had given since 1870 and it makes him extremely proud to say that he believes this has been achieved.

At the invitation of the new owners Ken did continue as a part time funeral director, eventually hanging up his top hat in 2016, having been involved in the funeral profession for 56 years, giving sympathetic understanding, guidance and assistance to bereaved families at a very difficult time in their lives.

E J Gumery and Son are proud to have served the City of Worcester and surrounding areas for 150 years, with our helpful and efficient service.